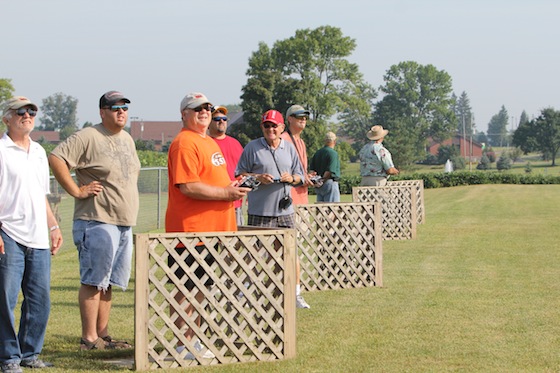 The Learn-to-fly Program is just that. We will teach new members how to fly R/C airplanes through the AMA Buddy Box system. We currently have four intro pilots as well as several other advanced pilots that are ready willing and able to teach newcomers to R/C how to fly their aircraft as well as how to set up and maintenance of their planes. This is offered free to our club members. If you would like to learn to fly R/C airplanes then please follow the steps to becoming a member found in the "Contact Us" page.The Learn-to-fly program is also available to regular pilots who wish to have help in learning specific maneuvers or who are out of practice and would like a refresher course.

While The Learn-to-fly program is centered around flying the aircraft by instruction of the trainer, it is equally important for the ground personnel to offer instruction to the trainee in the proper set-up and maintenance of their aircraft as well as safety issues both during flight as well as with building, running the engine/motor, charging of batteries, adherence to club and AMA rules, etc. The ground crew is as much a part of the overall instruction as the flight trainers are. This program works only if all the members of the instruction team as well as the trainee do their part. We have trained younger children as well as senior citizens and everyone in between to successfully fly R/C airplanes.

The general progression of instruction is as follows:

1) When a new pilot trainee arrives at the field the first thing done is to inspect the trainees aircraft for flight worthiness. This includes checking all hinges, linkages, visible glue joints, radio installation, covering, landing gear if applicable, balance, proper radio set up of flight control surfaces, engine tune in, battery voltage and capacity check, a frequency check, checking the trainees AMA card and ground instructions on the transmitter stick functions and controls.

2) The trainee's aircraft will then be test flown by two trainer pilots on the buddy box system to make sure the aircraft and buddy box are trimmed out, balanced properly, and is suitable for flight training.

3) The trainer will take off, climb to a suitable height and give the trainee instruction on what to do in the air and hand control to the trainee. This will continue till the trainee is able to control the aircraft in stable forward straight flight.

4) The trainer will then teach the trainee how to land the aircraft.

5) The trainer will then teach the trainee how to take off.

6) The trainer will then teach the trainee different flight maneuvers as well as how to recover from mistakes.

7) The trainer, when comfortable with the trainees abilities, will remove the buddy box system and will stand with the trainee for a few solo attempts, ready to grab the transmitter if needed, and then proceed to turn the trainee over to the test instructor for his final test Solo.

8) Trainee earns his WINGS and is allowed to fly freely at our field as a full R/C Pilot.

The intro pilots are also available to give orientation flights to non-AMA persons who would like to see if flying an R/C airplane is as fun as it looks. This is also done by use of the buddy box system but is only for 3 attempts without joining AMA and the Tailspinners club.

We welcome all newcomers to come out to the field and watch or take an orientation flight.  We can also offer advice on what to purchase if you become "hooked on R/C,"  as all of us are. We look forward to meeting you!